Carlos Fausto Miranda and how he believes in influencing people’s lives through real estate.

We at Calle Ocho News are always looking for people that are a huge part of our neighborhood and that are doing great things to highlight, honor, and appreciate.  We believe every community has champions that are silently working on their goals which affect many.   In this final edition of 2019, we want to tell you about Carlos Fausto Miranda and how he believes in influencing people’s lives through real estate.

Who is Carlos Fausto Miranda?

Carlos Fausto Miranda "Carlos" graduated from the University of Florida and like many people that get a degree to make our parents happy he found himself graduated and not knowing what he wanted to do.  What he did know was that he didn’t want to work for anyone. He went on to get his real estate license because it was the closest thing to owning his own business.   By then it was 2006 or how he likes to call it the “pre financial apocalypse”.  He says that he is glad he chose the real estate industry during a recession because he learned that “if you can make money during a recession you can pretty much make money all the time”.  He explained that it has been a long journey playing different roles within the same industry.  Carlos has done everything from being just a realtor, to the broker, to owning his own shop where different realtors (currently 20) work under him to finally owning properties.  This has led him to acquire a portfolio of properties (currently 15 in Little Havana, with more in other neighborhoods), and to his current mission of developing buildings from the ground-up.  Some people call it luck, but Carlos speaks of it as a continuous pathway of progression.

What he does and the challenges he faces.

The picture you see here is Carlos at the 475 SW 7 ST. construction site.  This will be the future home of a building that will be named Mariana after Mariana Grajales which was the mother of Antonio Maceo known as a feminist hero of the Cuban Revolution.  Fausto expressed to me that the great Cuban poet Jose Marti forever immortalized Mariana in words after seeing the matronly woman courageously rushing into an active battlefield to render assistance to wounded patriots, he said “happy are the heroes with such women”.  The building will house 28 space efficient affordable units that will be fully furnished and beautifully decorated catering to the working millennials that make between $35 and $75K per year.  These are the first of some 270 units in Little Havana that Carlos currently has in the pipeline.  He believes that building these types of buildings adds to the vibrancy, energy, and sustainability of neighborhoods like Little Havana, while not displacing a single resident and incrementally adding to the supply of affordable housing without tapping into corruptible public dollars.

He does not believe in buying historically designated buildings and tearing them down to rebuild.  As a developer more focused on building from the ground up it is tough to make everyone happy. In many cases you are the good and bad guy with the only difference being who you ask.  Carlos says that it is very difficult to build even if you have all the resources because the city makes it more difficult and more costly. “Sometimes it feels like a fight with your own city, yet it is your own city asking you for more affordable housing”. Very few people that go against what we do know how much goes into it.  “It is a system that is broken and in my opinion no one else is dumb enough to go through the ridiculous levels of challenges that you must surpass in order to build. It is incredibly risky because you must get an enormous amount of people to work together, it is near impossible to organize and the fines imposed for practically everything is not easy to keep up with.  Besides all the costs that go into building there is also a great portion of costs that are completely unnecessary but must be paid such as fees, fines, etc. to the city”. 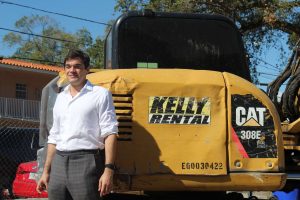 “There is plenty of empty land to build on in Little Havana without touching what’s historic if not to preserve it.  Almost every block has one or two empty lots.  They are small so they are not highly noticeable but there is a lot of them. The Little Havana Me Importa plan that Juan Mullerat of Plusurbia Design Group came up with would allow us to build in these lots creating density”.  He believes in this plan deeply but is saddened by the fact that he is not seeing greater support rally to its cause in either the political or popular level.  Density being in his opinion the solution to the housing problem in Miami. “Lots that are vacant get built bringing in more housing which helps the city because tax revenues go up.  If there is more housing, more housing means more people, more vitality in the streets, more energy, more people spending their money in the local businesses and in turn more density”.

Why Carlos does what he does…

“I feel very fortunate and honored to be able to impact people’s lives through real estate. When you think about it every single moment, from the best to the worst moments you have lived in your life has happened in the context of real estate, a place a setting or some physical reality.  So, when you think about the ability to alter and change or improve buildings that will cause an impact in people’s lives it is an honor.  I like to focus on neighborhoods with a lot of underlying value such as Little Havana”.

My passion does not lie in the dollar.  It is in what one can create and the legacy one can leave in one’s city or in one’s environment.  It is in the benefit you can bring to your friends, to your family, and to your community that far outweighs the value of the dollar”.