The series of 4 singer-songwriters performing monthly is now celebrating a year.

Little Havana laid-back drinking hole known for its craft cocktail menu and nautical theme, is celebrating a full year of its' weekly series this February 2019 after surely having made its mark in the 305.  Hosted by local music-man Juan Turros of Suénalo and For if the Flies-fame, the monthly series includes 4 local singer-songwriters singing in the round for an intimate listening experience.

“Listen we all know Miami is a tough town for live music, and even more so for singer-songwriters singing acoustically,” says Juan Turros,  “but we think this new format will make it much more appealing to the attention-deficit crowd that usually frequents loud concerts in Miami.” 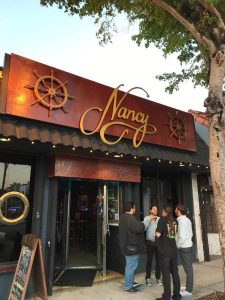 Bar Nancy has already made a name for itself for being home to some of Miami’s most original libations, so following in the steps of Nashville’s legendary dive-bar, The Bluebird Café sounds like a no brainer to co-owner Sasha Torres.   Miami is home to some major talent and fortunately many live amongst us in total anonymity. How cool will it be to catch the writers behind some Grammy-award winning hits in a low-key bar right in little Havana.

The first installment will include Latin Grammy winner and Grammy-nominated artist Jorge Moreno, two-time Grammy-nominated Elsten Torres whose written for many well-known performers such as: Ricky Martin, Luis Fonsi, Marshall Crenshaw, John Rich (Big & Rich) and many others, Beth Cohen a UM graduate who has toured with everyone from Boston to Barry Gibb, Chayanne, Jon Secada and even sang backing harmonies on Barbra Streisand’s Guilty Pleasures, and finally but certainly not least Colombian native Kika Pullido who has written many hits and performed with notables like Alejandro Sanz, Miguel Bose and Paulina Rubio to name a few.

“Bar Nancy has hosted many local music groups including Sunghost, Juke, Suenalo, and Radio Stereo most recently for our more upbeat live music nights so we are excited to try this out with our locals for a more laid back option,“ commented Ben Koufopoulos, Co-owner/Operator of The Bar Nancy.

About Bar Nancy: Created with the dream of making a great neighborhood bar, Nancy espouses Revolutionary Zeal in her no-nonsense approach to hospitality. Named after the Nancy, a doomed American Revolutionary War supply ship, the bar has a nautical theme that includes everything from a haul-shaped bar and porthole windows to inspiring drink names like “Smile You Son-Of-A-Bitch” (a Jaws movie reference for those born after 1975).

Nancy is located at 2007 SW 8 Street in Little Havana, Florida.   Nancy’s crew is comprised of co-founder Ben Koufopoulos, co-owner and managing partner Sasha-Alexandre Torres, and a team of award-winning bartenders and hospitality titans. The Nancy features delicious craft cocktails and assortment of “rations” consisting of some really tasty originals like our Fiddlers Green and Nancy’s Kettle. For a full menu visit www.Nancy305.com.

Writers in the Round is celebrating its 1 year anniversary this February 2019 . The event is open to the public (21 and over).  Reservations are recommended for this event as the best tables will fill up fast and there is a $10 minimum consumption for all guests at the tables.   Please call  (305) 397-8971 for reservations. For a complete list of events and happenings “follow/like us” on Facebook, twitter or instagram at @barnancy305.