Little Havana is on the map for Super Bowl LIII and we are excited as can be for the festivities.

I had an interesting experience one morning two weeks ago. While drinking Cuban coffee at El Exquisito’s ventanita and reading the latest Calle Ocho News edition, I looked up to see a great deal of activity  at the fabled Ball & Chain across the street from me.  That bar and music hall was already in mid-day form.  Next door to it the artist, who goes by the tag, “gwizah,” was placing the finishing touches on a striking mural depicting the impending Super Bowl from a Miami slant with a nod to Fox Sports, which will be broadcasting the contest.  At the same time, Bill Fuller, one of the owners and operators of the Ball & Chain, invited me to cross Calle Ocho and join him and some folks from the bar for an interesting time with the talking heads from Fox Sports. Soon a group of musicians were banging out salsa music as the Fox Sports crew, headed by Curt Menefee, Jay Glazer, Jimmy Johnson, Terry Bradshaw, Howie Long, Michael Strahan, etc. all sauntered past the mural and into the Ball & Chain while displaying their best salsa dance imitations while adorned in Hawaiian shirts and shorts. 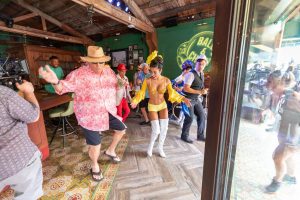 The Ball & Chain was an appropriate place for this run up to the big game, though it is still five months away, because the bar sits barely a mile away from the site of the storied Orange Bowl, which hosted five Super Bowls in a span of just eleven years in the early years of one of the world’s most popular sporting events. Additionally, the stadium that supplanted the Orange Bowl as the home of the Miami Dolphins and the Miami Hurricanes, today’s Hard Rock Stadium, has hosted five additional Super Bowls, giving Greater Miami the enviable distinction of hosting more of these classics than any other metropolitan area.  Come February 2020, the area will host the eleventh and latest iteration of this classic at Hard Rock Stadium.

Today’s Super Bowl is a billion dollar extravaganza with an audience in the hundreds of millions.   Almost from its beginnings in the late 1960s, the Super Bowl was a larger than life event, and Miami and its storied Orange Bowl represented its most important venue.

Built at a cost of $340,000 in 1937 by Franklin Roosevelt’s Public Works Administration, the steel and concrete structure that came to be known as the Orange Bowl contained, initially, just 24,000 seats.  Subsequent additions to it, including an upper deck, would bring seating capacity to 78,000.  Located on the former site of Tatum Field in the Riverside Heights neighborhood, the stadium was easily the area’s most iconic structure.

The merger agreement between the established National Football League and the upstart American Football League paved the way for a championship football game between the two leagues, with the first, played in Los Angeles, in 1967.  In that contest, the powerful Green Bay Packers defeated the AFL’s Kansas City Chiefs, 35-10.

The following two Super Bowls, as the contest quickly became known, were played in the Orange Bowl.  The first, Super Bowl II, was played before 75,546 fans on January 14, 1968.  The city was swamped with out of towners here for the game. Ticket prices were $12 for the best seats, and $6 for the remainder!  An estimated 50 million persons saw the game on television. But not Miamians, since it was blacked out at home because of a league rule.  Again, the dynastic Packers prevailed with a 33-14 victory over the Oakland raiders.

The Orange Bowl was the venue the next year for Super Bowl III, one of the most famous contests in this classic.  Played on January 12, 1969, under sunny skies after a morning fog had lifted, the N.Y. Jets upset the highly favored Baltimore Colts, 26-7. Three days earlier, their brash quarterback, Joe Namath, stood before a crowd of 700 at the Miami Touchdown Club,  raised a glass of Johnny Walker Black and water and “guaranteed” a Jets victory. Namath was brilliant in the shocking upset that followed on the turf of the Orange Bowl. Afterwards, he told a stunned press corps and anyone else within earshot, “Hello World, Welcome to the American Football League.”

Ticket prices for that memorable Super Bowl III were the same as the year before while a football program fetched just $1!  On hand for the contest were Senator Ted Kennedy and his infirm father, Joe Kennedy (Just six months after the assassination of Teddy’s sibling Bobby Kennedy) .  Three Apollo astronauts led the singing of the National Anthem.

We will conclude our look at Super Bowls in the Miami area in the next installment of this column.