In this special edition for Mother’s Day, Calle Ocho News has chosen two very special people to interview and highlight. Miriam Fuller and son Bill Fuller that have not only made history in Little Havana but that have been a big part of making it what it is today. Because Calle Ocho News is a family owned and operated business since 1999 our goal is to promote the importance of unity and family in our community and potentially inspire everyone to act upon these values.

It is extremely important to us that the stories of the people that make Little Havana what it is today be told. You can always find this on our website CalleOchoNews.com under the people section by doing a simple search any time you want to read a little about what makes the neighborhood something people travel from all walks of life to experience. 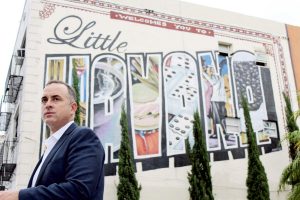 As the editor in chief of Calle Ocho News it is my job to build relationships. When I set out to look for people that are making things happen in Little Havana, I kept running into the name Bill Fuller of The Barlington Group and Mad Room Hospitality. I could not believe I knew so little about a man that has done so much for our neighborhood, but after learning how modest he is about his accomplishments, it all made sense. I had the pleasure of meeting with Bill at The Taqueria El Mexicano located on 5th Ave. and SW 8 St. which includes a new nightclub upstairs called Los Altos. The theme of Los Altos is a very original and secretive concept that is not that big of a secret anymore given the lines that can be seen outside on any weekend. This is one of his latest ventures on Calle Ocho that should not be missed. In case you didn’t know Bill is also the visionary behind the world-famous Ball & Chain.

The Taqueria El Mexicano is a perfect example of what Bill dedicates his life to. In talking with Bill, I learned that he is a preservationist and that he worries about the neighborhood a lot. The Taqueria has been around for many years so when he and his partners of Mad Room Hospitality bought it their goal was not to disturb its original decor and so he just built upon what was already there. Go see for yourself! Order a margarita while you sit back and pretend you are in Mexico when you really have not left Calle Ocho.

Little Havana is the heart of Miami. It embodies what the old Miami used to be. It is authentic, unaffected, and untainted by influential parties or developers. It is currently in its undisturbed state and I do not want it to become the next Wynwood. - Bill Fuller

I had heard some very nice things about Bill before I met him but none that came out of his mouth about himself. Bill dedicates his life to protecting the neighborhood from becoming something that rips the very essence of it from its people. He is a board member of the 20-year-old art and culture event that takes place the third Friday of every month in Domino Park called Viernes Culturales, and he also serves on the board of Dade Heritage Trust. He makes it a personal policy to never rent to the highest renter, even if that means keeping out giants like Starbucks. He feels it is important that small businesses be given the opportunity to develop unique concepts as opposed to simply rewarding leases to the highest bidder. This alone makes him an anomaly.

What Do Some of His Peers Say About Bill?

He is a pillar of the community. - Jose Navarro of Camacol

Bill Fuller has breathed new life into Little Havana. He is a passionate Miamian who loves his city and understands the social, cultural, historic, and economic significance of Little Havana. - Joe Cardona of Radio Martí

People will tell you that he saw the potential in this neighborhood before many others. A true visionary and artist are what many would add.

I asked Bill what inspired and motivated him to work in Real Estate:

“My mother both inspired and motivated me and I can’t think of any better way to honor my Mother this Mother’s Day than to give credit where credit is due.”

When you see Bill you see a true family man. You can easily catch him having dinner or at the Viernes Culturales festival with his wife Melissa Bernheim Fuller and their three children, or making the line to get in to the grand opening of his own club Los Altos with his mother and wife, or flipping over a table during an interview to fix its wobbling because to him problems are best handled when they are encountered. I mean why put off for tomorrow what you can do today seems like his philosophy from an observer’s standpoint. The bottom line is that Bill is a hard worker and he learned it from his mom. Which according to him is “As Cuban as it gets.” 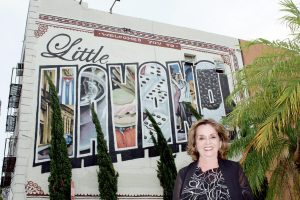 I met Miriam the day that we took the picture you see here, and in my desperate and embarrassing attempt to motivate her to smile I said “Pretend you just closed a big deal and you made a million dollars." What she answered left me thinking: “Making a million dollars does not make me smile, other things make me smile” and then gave me that warm smile anyway.

The most important thing in life is being united with your family, that is what makes me smile. Money helps a lot, but it does not buy happiness in your soul. Personality comes from the soul, but character comes from the way you are raised. - Miriam Fuller

Miriam Fuller came from Cuba on operation Peter Pan when she was 12 years old in 1962. She considers herself a strong person and feels proud knowing she shares strength as a common attribute between her and her own mother. She says her mom taught her to be a warrior. She admits life is hard and that we all go through troubles. It is how we handle those troubles that makes all the difference.

My mother used to tell me that its OK to fall as long as you get back up every time. - Miriam Fuller

Miriam has always been passionate about Little Havana not only because of her own origin but because she says she always wanted to see the area refurbished. She went on to tell me that people used to refer to Little Havana as Little Vietnam back in the 80's.

Q: Miriam what are you most proud of with respect to Little Havana and where it is today?

A: “I am happy to see lines of buses full of tourists from all parts of the world coming to visit and that Little Havana has become a destination point. I hope it continues to grow all the while maintaining its original flavor.”

Q: Miriam what do you feel Little Havana needs more of?

A: “I wish the city would be more involved in helping the homeless. It is a growing problem in our community and maybe if it becomes enough of a priority for our official’s we can all be a part of a solution.”

Q: Miriam how does it feel to share a career with your son?

A: “We make a great team and we have done beautiful things together; I am delighted with our accomplishments.”

We leave you with this message in closing. Gratitude and the act of being grateful can help us appreciate what and who we have now and not when they are no longer an option. We feel it is our duty as a community leader to stand for what really matters, so this Mother’s Day take some time to appreciate those around you.