The Cuban Historical Political Prison or “Casa del Preso” continues to be a haven for men and women who have stood against the Castro regime till this day.

“Casa del Preso” (Cuban Historical Political Prison) is an unassuming, yet very special place found on Cuban Memorial Way.  This is also where the Presidio Politico Historico Cubano (PPHC, translated Cuban Historical Political Presidio or Prisoners) , an organization dedicated to assisting political prisoners from Cuba, living in Miami and others incarcerated on the island overseas for the past 40 years, is headquartered.

Founded October 28th,1978 the , this year the PPHC organization and headquarters, known as “Casa del Preso” celebrated its 40th anniversary! The Assembly took place at the monthly October meeting on Saturday, October 26th at 3pm. This was a special meeting, also dedicated to its Founder Renan Llanes, who recently passed away, as well as members Agustin Robaina and Abel Nieves, recently deceased due to health issues. Memorial services for those who have passed on also take place at Casa del Preso.

The purpose of the PPHC Organization is to continue to fight for freedom and democracy throughout the island today, particularly for journalists who are still incarcerated and others, such as bloggers and artists, politically persecuted to this day.

Most recently, Members of the PPHC commemorated Women Prisoners with a dedicated plaque by the giant ficus tree, located behind the map of Cuba, on Cuban Memorial Way and SW 10th Street. The portion of the street between 12th and 14th Avenues has been co-designated “Calle De Las Presas Politicas Cubanas” by our City of Miami Government and Miami-Dade County to honor women who have also been incarcerated throughout the past and presently. The initiative was sponsored by economist Manolo Reyes, who was recently re-elected automatically to the Board of City Commissioners unchallenged. Several public officials also supported Commissioner Reyes’ proposal to highlight the contribution women prisoners have made, fighting against communism in their homeland for decades such as Commissioner Eileen Higgins. 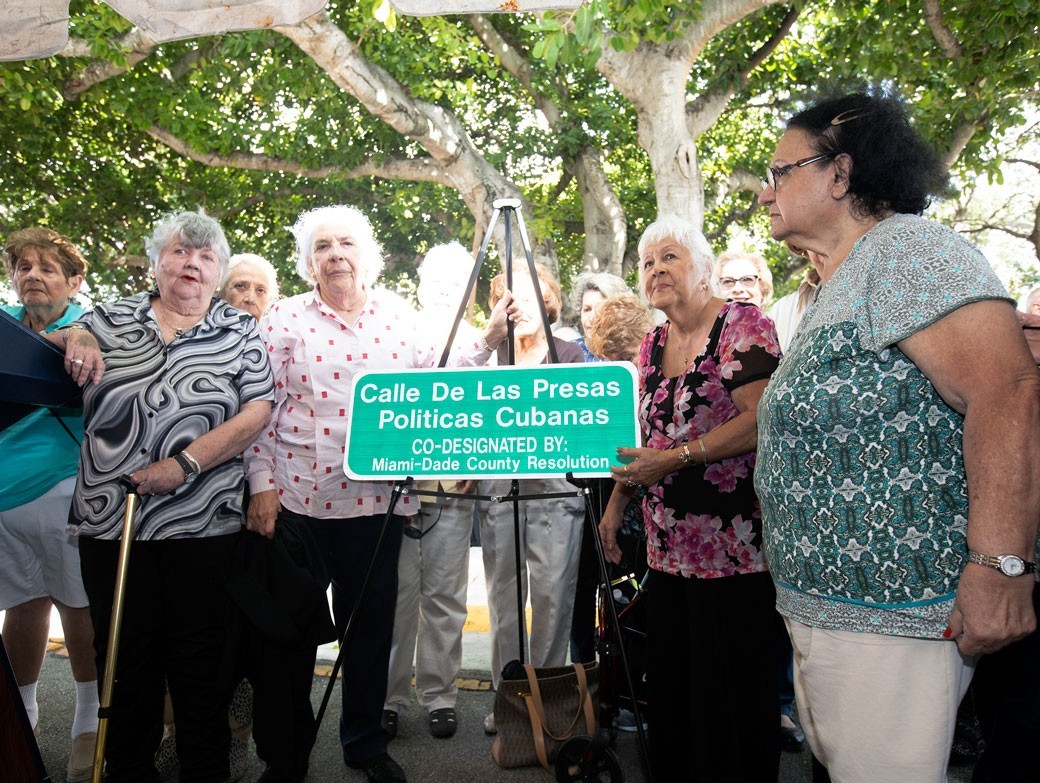 Previously incarcerated women survivors were present, along with members of the general public, and residents of the area, to support those who have survived.  Dr. Ana Lazzara Rodriguez spoke on behalf of the surviving women. The ceremony ended with an inspiring message and recognition by Commissioner Reyes, according to Luis Gonzalez Infante, currently Vice President of the PPHC.

At the September Assembly, a beautiful book with pictures of 200 women previously incarcerated was also presented at the monthly gathering. The book by Luis Infante, is the first edition, which was distributed and gifted to the women during the meeting. Each photograph contains a short caption, detailing information about each heroic individual female, dedicated to fighting communism in their Cuban homeland. The book is called “ROSTROS: Expresas politicas anticomunistas de la tirania castrista”

Members of the PPHC meet up monthly, generally the last Saturday of the month. The PPHC is currently lead by President Jose Luis Fernandez, Secretary of Culture, Angel Pardo Mazorra, among others. At the end of each unforgettable reunion a traditional song called “La Montaña” is sung by its members.

The services offered at Casa del Preso are integral to our community, still. This November 2019, the list of political prisoners had three more names added as well, according to Radio Television Marti, which  is simply evidence of a crisis situation that continues to affect many Cuban families today in Miami and abroad, proving the importance of the PPHC organization, as a new decade begins.

In Little Havana’s Cuban Memorial Park sits a monument to Antonio Maceo; the first monument of the mulatto (Afro-Cuban) general to be installed in a...

Aguacate Sanctuary of Love, a heaven created by Daney Cabrera

At Aguacate Sanctuary of Love even Hispanics can change, evolve, elevate; We just need to want that for ourselves.   In January, we...

Miguel Cruz of Cuba Ocho Museum, a true legend of our community.

Local legend Miguel Cruz plays a big role in keeping the culture and history of Cuba in Calle Ocho. He plays the drums and educates tourists and...