After 28 years of serving our community with CAMACOL, it is time to turn the page and possibly open another book says Mercy Saladrigas.

Mercy Saladrigas Immediate past Interim President of CAMACOL  served the Latin Chamber of Commerce of the United States, CAMACOL whom plays an integral part in strengthening small and minority businesses in Miami Dade County. Mercy began her journey as a volunteer in 1992 but her exposure to CAMACOL began in the 70’s when her father was a member. She moved up the ranks eventually serving on the board of directors as Vice President and recently stepped down after serving 3 years as Interim President. She is very fond of the memories she has with CAMACOL serving the community and working alongside other influential women such as Nancy Marquez and Olga Nuñez. Her next steps as the new year and decade begins is a surprise, however, she did reveal her plans to increase women empowerment by working with mothers, businesswomen, wives, and students alike. 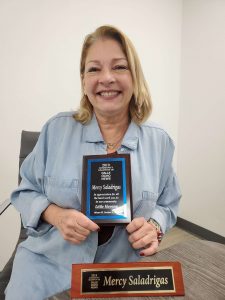 Immediate past Interim President of CAMACOL, Mercy Saladrigas was recently named as one of the Calle Ocho News Community Champions because of all the work she has accomplished to benefit Little Havana.