It is love at first bite as Chef Michael Schwartz makes Miami’s most iconic sandwich open-faced as the Versailles Cubano Pizza for a limited time only. Featuring Versailles roasted pork and glazed ham, bread and butter pickles, mustard sauce, fontina and gruyère cheeses, and a Versailles croqueta, the special collaborative pie will run from Monday, January 14 until Thursday, February 14 at all South Florida locations of the James Beard Award winner’s casual pizza restaurants. Since 1971 the original Calle Ocho location of Versailles, the world’s most famous Cuban restaurant, has been a cornerstone of the Little Havana neighborhood and a community gathering place for conversation whether over a cafecito or its famous Cuban sandwich, “El Cubano”. Almost 50 years later, this culinary icon has achieved ubiquitous global recognition as a symbol of Miami’s diverse cultural identity and the unique food traditions that have developed as a result. 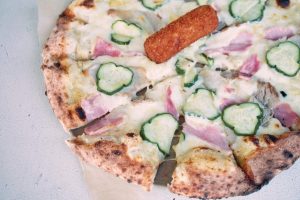 “I’ve been a fan of Versailles since moving to Miami in the early ‘90s and as a chef I have a keen appreciation for the Valls family’s commitment to keeping it simple, doing things right, and bringing the community together,” Michael says. “We love to get creative with toppings combinations on our pizzas, and taking this one for a spin is a long time coming! We are so grateful to everyone at Versailles for not only entrusting us with these unique ingredients, but their genuine enthusiasm in having fun with the formula. We think the result tastes pretty great and something we can all gather around and share – if there’s any left!”

Inspired by this memorable combination hot-pressed inside fluffy, crispy Cuban bread, Chef Schwartz is sourcing the roast pork and glazed ham from the Versailles kitchen to honor the original recipe. With layers of mustard sauce, bread and butter pickles, and the combination of fontina and gruyère cheeses to balance melt and flavor, each pie is also topped with one of its famous, mouthwatering croquetas to break open and enjoy with each slice.

“We are thrilled to be partnering with Harry’s Pizzeria and Genuine Pizza on this fun and delicious collaboration,” says Versailles owner Nicole Valls. “Our family is a huge admirer of Chef Schwartz and all he has done for the Miami food scene, and we are excited to have everyone taste this new spin on Miami’s iconic dish.” ®

Beginning Monday, January 14 through Thursday, February 14, the Versailles Cubano Pizza will be available all day long for $16 during regular business hours for dine in, takeout and delivery at all South Florida locations of Genuine Pizza and Harry’s Pizzeria including Miami Design District, Downtown Dadeland, Coconut Grove and Aventura Mall. For the restaurant nearest you visit genuinepizza.com/locations.

With whom would you like to share a Cubano Pizza? Let us know by joining the conversation on social media #genuinecubano and follow along for giveaway news, events and more @chefmschwartz, @harryspizzeria, @genuinepizza and @versaillesmiami.

About Chef Michael Schwartz and The Genuine Hospitality Group

The Genuine Hospitality Group is Philadelphia-born James Beard Award-winning Chef Michael Schwartz’s restaurant group that began in 2007 with the opening of flagship Michael’s Genuine® Food & Drink. Genuine is a thoughtful approach–not just making food that tastes great from quality ingredients presented simply, but a tireless, it-can-always-be-better attention to detail in every aspect of the dining experience. According to Schwartz, the philosophy is simple: The secret to good food is good food. Beloved by locals and visitors to Miami, Michael’s Genuine set the bar for neighborhood dining with its menu based on simple preparations of seasonal ingredients and the atmosphere to match. Michael took home the James Beard Award for Best Chef South in 2010 cementing his reputation for reinventing a fresh approach to food and defining sincere hospitality in Miami. The restaurant group currently operates 10 including growing pizzeria brand Genuine Pizza®/Harry’s Pizzeria®, and Amara at Paraiso, Eater Miami’s 2018 Best New Restaurant. Outside of the restaurant, Schwartz focuses his time and influence supporting the arts and causes such as Share our Strength, Alex’s Lemonade Stand Foundation, and Wellness in the Schools. His second cookbook, Genuine Pizza: Better Pizza at Home is due out May 14, 2019 with Abrams Books.

About Versailles Restaurant Versailles Restaurant, The World’s Most Famous Cuban Restaurant, has been serving tasty Cuban cuisine and culture to the South Florida community and tourists from around the world for four decades. Soon after it opened its doors in 1971, Versailles quickly became the gathering place and unofficial town square for Miami’s Cuban exiles. Today, it remains the unrelenting gauge of the community’s pulse. Not surprisingly, Versailles is typically the first place politicians visit locally to garner support from the Cuban exile community, and the restaurant is equally a favorite among the media for gathering commentary and footage of the community’s take on social and political issues. It is not uncommon to see local, national and international media set up camp in Versailles’ parking lot, where they’re sure to get a flood of local viewpoints. For more information, visit versaillesrestaurant.com

Miami Dade County Mayor Carlos A. Gimenez recently released the first draft of the guidelines local businesses should expect to follow as Phase I of...