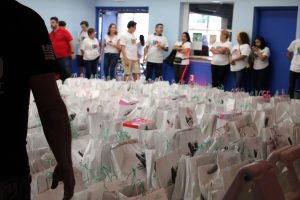 Since 1992, Amigos For Kids has hosted the annual toy drive, which encompasses a gift-giving program that fulfills thousands of holiday wishes for underprivileged South Florida kids.  The event helps both create awareness about child abuse and neglect, while spreading holiday cheer to many deserving families in our community.

“The Amigos For Kids Holiday Toy Drive has become a staple of our community.  We feel truly fortunate to have such great support from donors, sponsors and volunteers who exemplify the joy of giving and help bring so many heartfelt smiles to the faces of children this holiday season,” said Lydia Muñiz, Amigos For Kids interim president and CEO.

The 28th Annual Holiday Toy Drive kicked off with the help of over 300 Amigos volunteers collecting, sorting and packing toys to fulfill the individual wish lists of the previously identified children.  On Sunday, December 15th, a daylong joy-filled caravan featuring Santa Claus, local celebrities, community leaders and volunteers made stops in Florida City and Little Havana to spread some holiday cheer to over 600 children. 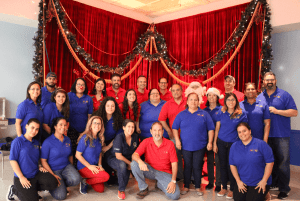 Children identified to receive gifts were selected from Amigos Strengthens Families and Communities program (Nurturing Parenting, After School - Jose Marti Park), and organizations such as: Everglades Housing and Westwood Elementary in Fort Lauderdale.

Toy distribution will continue throughout Broward and South Florida until December 22 to ensure all children receive their gifts by Christmas Day.

“Year in and year out, Amigos For Kids Holiday Toy Drive brings happiness to some of the most needy in our community,” Amigos For Kids Board Chair Nicole Valls added.  “It is inspiring to see South Florida come together with generosity and goodwill.”

ABOUT AMIGOS FOR KIDS- Amigos For Kids is a 501(C) 3 nonprofit corporation founded in 1991 to respond to the diverse needs of South Florida’s abused, abandoned, neglected, and less-fortunate children and their families, through education, abuse prevention, and community involvement. To fulfill its mission, Amigos relies on the support of dedicated volunteers and donors throughout the community. Throughout the year, the organization creates awareness of its cause through public service campaigns, fundraising events, and community efforts such as the Amigos For Kids’ There’s NO Excuse for Child Abuse! ® Campaign.  @amigosforkids